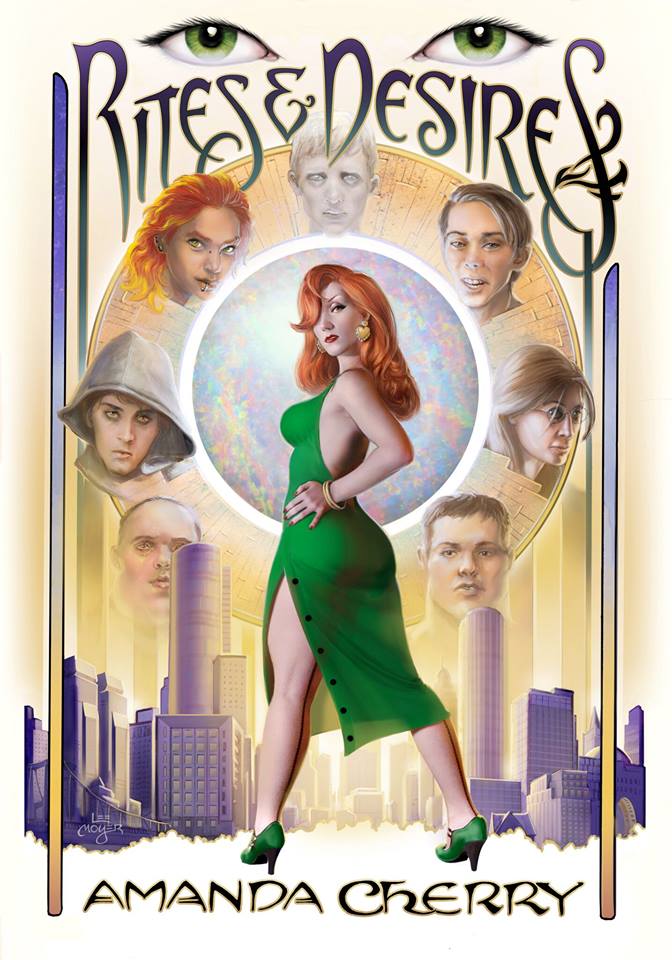 First of all, how DARE you!

Second, I say that with love. Because as much as I wish I’d created Ruby Killingsworth, I never could have pulled this novel off with such joyful aplomb.

See, there’s been a number of stories told in Cobalt City over the years, but never anything like Rites & Desires, in which debut novelist Amanda Cherry gives the city something it has sorely needed: compelling, sexy villainy. And Ruby brings that by the bushel.

The ruthless executive of Goblin Records got where she was through a combination of skill, grit, manipulation, and magic. Or some combination of same. But she’s lost her magic, and is undertaking some dangerous (and of course illegal) methods to restore her former powers. This provides the main spine of the story, and initially I had problems with how it was paced. It felt like success was coming too easily. Until I realized that Amanda had more tricks up her sleeve, and what I saw as an early victory was just the first step on her quest. Once I settled in and trusted the story to unfold at its own pace, it became a rollicking caper.

As for Ruby herself, (and the major b-plot), she has the kind of classic good looks and fashion sense that would have gotten her painted on the nosecone of B52 seventy-five years ago. She’s the woman who appears to have everything she’s ever wanted. But she’s envious of those she sees with more. When she undertook her seduction of Cobalt’s favorite son, the awkward Boy Scout of a hero Stardust, I interpreted it as less of an interest in Jaccob “Stardust” Stevens himself, and more spiteful grab at something she feels she deserved–whether she genuinely wanted his affections it or not. Initially, I read it as her seeking the satisfaction of stealing this paragon of virtue and simple goodness from tall, brilliant, and beautiful Elizabeth Stevens. And it’s in this compelling subplot that I saw the most character growth from Ruby.

There’s something compelling about the corruption of the innocent storyline. Especially when that innocence changes the person who seeks to corrupt them in the first place. And the unfolding of what becomes a real relationship feels natural, hard-earned, and it leaves its marks.

If I had any complaints, they would fall among the common flaws of first-novel-itus. In particular, I think there was about 5% more on the page than really needed to be there at times. But the sheer enthusiasm of the narrative and freshness of authentic voice more than compensated for that.

All in all, I found Rites & Desires to be a great read. It was not only welcome–it was long overdue–to see a story from the villain’s perspective. And in Ruby Killingsworth, Amanda Cherry has given us a fascinating and flawed woman to root for. Even if you might not want her to win.

Highly recommended and available now on Amazon at this link.