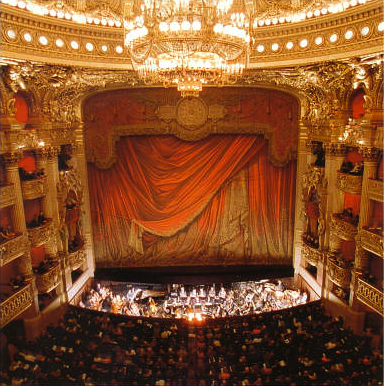 Welcome to the Long Shut-In.

If you’re like me, you have at least one or two streaming options and a list of shows and movies to catch up on that, facing the long weeks of CORVID-19 self-imposed isolation, might not seem like enough. Maybe you’re bored, looking for something new. Maybe you just want to shake up the routine, to be introduced to something new–because going out in the world often had that energy of “anything could happen.”

Welcome to the opera!

See, the Opera didn’t always used to be hoity. It was blockbuster cinema / pro-wrestling of its time, entertainment for the masses. Less than 100 years ago, they used to broadcast the opera (and symphonies) on the radio for everyone to enjoy. When I was a kid, they used to show it on PBS. And yeah, it’s almost always sung in a language other than English, but honestly, even the operas written in English can be hard to really piece out the exact wordage. But let’s face it–inarticulate lyrics never stopped The Kingsmen’s “Louie Louie” from being a bop.

Also, opera is far from a dead musical form. New operas are written all the time. In fact, there was one based on Stephen King’s The Shining that came out a few years ago that was legitimately awesome.

Beautiful music is beautiful music. It elevates us all, and shouldn’t be the sole domain of any one class. And it’s possible that you’d actually love opera if you gave it a chance. If nothing else, you can tune in to see the gorgeous costumes which, trust me, are worth every second.

Now, thanks to the ongoing health crisis forcing the temporary closure of several world-class performance halls, they’re bringing the culture to the masses online.

Starting Monday, March 16th, the Metropolitan Opera in New York, one of the finest operas in the world, is putting up an opera every night, free for anyone to stream. The operas go live at 7:30 PM and will remain up for 20 hours, so you have a degree of flexibility with when you watch. They will link from the Met Opera’s homepage on day of show.

For the curious, here’s a brief glimpse of the first week of their programming.

One of the most famous operas of all time (I all-but-guarantee you know some of the tunes from this one), it concerns a soldier in southern Spain who falls in love with the title character, Carmen. But when she loses her heart to a toreador, things go quickly sour.

You know the musical RENT? Then you know this show. The lives and loves of a group of Bohemian artists living in Paris–and poor, doomed Mimi. Perhaps a perfect opera for our current quarantined situation.

Witchcraft, murder, vengeance, and some great goddamned music. Things kick off with a mother burned at the stake for alleged witchcraft, avenged by her daughter when she throws the child of the executioner into the fire. This show is cuckoo bananapants in the best possible way. You’ll love it!

About a fallen woman who goes astray, this opera was developed from a play based on a novel by Alexandre Dumas. You know–the Three Musketeers and Man in the Iron Mask guy. One of Verdi’s best.

This fun, light comic opera concerns a young woman who was found as a baby on the battlefield and raised by the military regiment. When the truth of her family becomes known, things get spirited. And complicated for a pair of young lovers.

Another Donizetti, this one is more of a tragic romance. Like, operatically tragic. Involving an affair between members of rival houses in Scotland, there’s no way this ends well. But that’s half the fun of a good tragic opera.

Based on the classic Russian novel by Alexander Pushkin, Eugene Onegin features a selfish hero who coldly rejects a young woman’s love, setting in motion a tragic series of events–including a fatal duel with his best friend. A great piece of Russian opera not to be missed.

If the quarantine continues, I expect the Met to roll out even more of their back catalog of operas. They have some doozies in the wings, and I encourage you to check out one or more.

For the doubters, I’m sharing one of my favorite pieces (which is not featured in any of the above operas, fyi.) Put it on, close your eyes, and let it wash over you. Delibes: Lakmé – Duo des fleurs (Flower Duet)