Posted on February 4, 2014 by Nathan Crowder 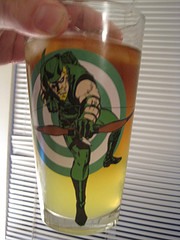 I’ve been a Green Arrow fan for a while. Heck, I even blogged about it a while back when I reviewed issue #7 of the comic. And when the tv series Arrow started, I was looking forward to what they could do with the character and his mythology.

We’re now past a season and a half in, and overall, I’m delighted by the series. The way they reinvent the mythology, the way that they build on little tidbits laid out over the season. The big cast with solid support characters (particularly Diggle and Felicity). All really good. And I’ll admit, when I get to a reveal or see a payoff of things they set up several episodes before, I have been known to squeal with delight.

But, Arrow, for all it does right, has some problems. As one of my Arrow watching friends commented the other week: “Watching Arrow. I’m a glutton for punishment. If she gets kidnapped tonight. Jesus.”

Fans of the show no doubt know exactly who I’m talking about.

Arrow, you have a real problem with “Damseling” Laurel Lance. If you’re not familiar with that term, it refers to using the capture of female characters, the “Damsel in Distress” trope, to motivate male characters to action. It’s come into focus recently as an overused trope in video games, but the idea far predates that. It’s tired. It’s cliché. It’s sexist. And it’s lazy writing. I get that Laurel’s big arc for the season involves breaking her down to her lowest point so she can rebuild herself, but there are other ways to do that and I get the feeling that you’re not even trying as long as it fulfills that basic mandate. In the first half of the season, she’s been kidnapped at least twice, and her safety used as a carrot to motivate several other plot-points for her male protectors, both her father and Green Arrow.

It’s been noticed. It’s been discussed. And it’s problematic.

But it does have one unexpected benefit.

It helps to point out the trend in other media, including the novel I was in the middle of writing.

I have three primary characters in Redemption of the Yellow Wolf. The primary POV character is Ulls Sturmgard, and he is joined by two other capable heroes on his journey–both of them already limited in their communication range, Whisper being essentially mute, and Melkin not speaking the language. And I looked ahead to the middle arc of the book and realized that I was due to have all three characters captured, in effect damseling both Whisper and Melkin.

This was set up in the outline, and honestly, I didn’t even blink at the idea then. Over the course of writing, these characters became more than names. And thankfully I’ve been paying more attention to misogynist tropes and language, so I was able to spot this before I got to it. Whisper and Melkin aren’t plot devices, and it was wrong for me to use them as such. Not only is it wrong to strip them of their agency, it diminishes them as characters. And it’s lazy.

I’ll tell you this here and now, some free advice from your Uncle Nate: there are a lot of sins committed by bad writers and laziness lies at the root of a lot of them. Sometimes it disguises itself as “good enough,” or falls victim to “backstage-itus” where characters essentially fail to exist when they aren’t in a scene. I’ve been writing a long time, and I still do this. At some point in the draft, I expect most writers do. The challenge is to spot it and try and do better.

Whisper and Melkin are wily, capable characters. There is no rational explanation why they would be captured and not be capable of doing something about it. So I looked at it again. Tore it apart. Put it back together better, stronger than before. It doesn’t make Ulls less of a hero. Nor does it make his actions or decisions later in the book any less important. Do they still need him? Of course. But no more than he needs them.

That’s what family is.

And if my intention is to build this trio of broken misfits into a family, they need to respect each other’s strengths. They need to trust, and to know when to ask for help. They need to be able to stand on their own in such a way that any one of them could be the hero of the story if the camera shifted to them.

On Arrow, Laurel Lance is a righteous, tenacious woman and a fierce litigator. They made that clear for most of last season. And they’ve proceeded to tear her down, first with guilt, then with addiction, and trust issues. I know you want to keep her more involved in the story, but there are ways to do it that don’t involve her needing to be rescued so often. I want to like her. Most people want to like her. But damn if you aren’t making that difficult to do.

If you weren’t doing so much other stuff right, it probably wouldn’t bother me so much. I’d just write it off as another vaguely fascist adolescent male power fantasy. But you’ve proven you can do better.

I’m fixing my problems, Arrow. Let’s see if you can do the same.