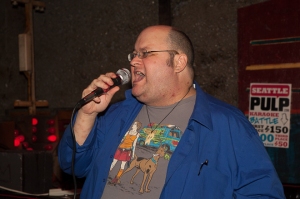 This is one bit of advice writers get a lot: Write what you love and the rest will take care of itself. There are many variations on that, of course, but the core message is, don’t try to be what others want you to be. Be true to yourself and follow your own dreams.

It’s a difficult thing to do. I won’t lie to you. It’s so much easier to listen to what others expect of you and to try and meet those expectations. I get that. I’ve done it.

But it never made me happy.

Because the only person who can decide what it is that makes you happy is you.

You just need the courage to not give a shit for what anyone else thinks. Find your passions. Enjoy the stuff you enjoy and don’t apologize for it. In fact, share it, with as many people as you can–as many people as will listen. Joy is contagious, and let’s be honest, the world needs more of it.

When I started getting serious about writing, I had to find my voice and trust myself to tell the stories I wanted to tell. I didn’t try to write a paranormal romance vampire novel because I don’t like vampires and I don’t read enough romance to be confident writing it. Instead, I write what I write–what I want to read–what brings me joy. And those stories sell, which is lovely. But even if they didn’t, I’d probably still be writing the same weird stuff about deer people and sentient mold colonies and amorphous, timeless lifeforms occupying cold lakes.

I started doing karaoke 12 years ago, but didn’t go that often. I loved it, but I wasn’t going to go out by myself, and most of my friends would only go infrequently, at best. A little less than a year ago, I introduced one of my best friends to karaoke for the first time, and she embraced it with the same enthusiasm I had always felt but been reluctant to show. I had been going once every few months. For most of the past year, it felt strange to go less than once every week or two.

I love singing. I love, for a few minutes at a time, stepping outside of my normal life and getting up on that stage and sharing something that I’m passionate about. Even when I suck. Even when I pick a song a bit out of my range, or where I don’t actually know the bridge, I love it. A bad night at karaoke is better than a boring night doing nothing.

Now, I think I’m pretty decent at it, especially when I stick to my established songs. And my friends agree, but they’re a very supportive group. And again, you should love what you do whether you get external validation or not.

But damned if it isn’t amazing when you get it.

Last night I competed in a karaoke battle at the Cha Cha Lounge on Capital Hill. A friend had band practice next door and showed up for a drink but not long enough to see me sing. So I didn’t have that same support group. A lot of my stronger songs weren’t on the playlist. After getting blown away by some of the singers in the first round, I wrote the night off as a chance to sing in a new place and enjoy a few Pacifico beers.

Then, quite to my surprise, I won the second round by singing “White Wedding” and went on to the finals. And in the finals, the judges/host picked the artist who we would all sing. They chose David Bowie.

Let me digress here for a minute. There are a couple different kinds of karaoke singers. There are the ones who go to goof around on stage with friends and don’t take it too seriously. There are the ones who have a very small list of songs, who finely hone them until they’re perfect, and drop in, knock out their signature tunes, have a drink, then leave. And then there are the ones like me who are constantly trying out new songs, building a long list of material for whatever reason. And I love music, so I’m familiar with a pretty broad range of songs and artists. I’ve got done everything from Jim Reeves to Public Enemy to Coheed and Cambria to Willie Nelson to Stevie Wonder. If I’ve heard the song and like it and can hit the range, there’s a chance I’ll try it at least once.

So, yeah. I know David Bowie. I have done three of his songs at karaoke before. I know enough of his material that I could have probably done most of the songs in the song book last night. But I love “Rock and Roll Suicide,” so I jumped at the chance to do it there.

It won me the gold. But even if it hadn’t, I had that magical 3:02 belting out a song I love in front of a room full of strangers. And life doesn’t get much better than that.

10 thoughts on “The Value of Doing What You Love”