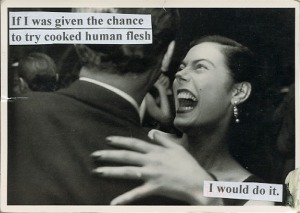 “The tango never stops in Buenos Aires. It goes on and on and we all dance to it in our time, helplessly drawn when fate initiates the cabezazo.” — from “Father Pena’s Last Dance,” Hannah Strom-Martin

Inspired by irrepressible Christine Yant, I have decided to adopt Fan Letter Sunday. And it’s largely because of this story, “Father Pena’s Last Dance” in Realms of Fantasy, August 2010, that I’m doing so.

See, I’ve reviewed books, movies, comic books, even bands–it’s how I share my love for what they’re doing. It’s my way to champion the things I enjoy and encourage more people to experience them. But I don’t really review short stories that appear in individual magazines. I don’t know why. Maybe I need to change that. Part of that might be because I went through a long period where I wasn’t reading short fiction in magazines or online, just anthologies. That changed when I made the decision to subscribe to a few spec-fic magazines for a variety of reasons.

That’s how I was introduced to Hannah Strom-Martin and Father Pena.

If I had come across the story in any other way and heard the words “vampire” or “Tango,” I probably would have just passed it over. And my life would be much poorer for that decision. I don’t care for vampire stories as a general rule. It seems like so much of what I come across is the same series of tired, recycled tropes trotted out one more time, like Halloween decorations a decade past their prime.

But “Father Pena’s Last Dance” is a revelation. Not only does it capture the magic, mystery, and music of Buenos Aires, it reinvents vampires in a way I never could have seen coming. And it made me want to learn Tango. The way you tied the vampires to passion, and through that, dance, was truly inspired. It has an amazing noir feel, a tragic inevitability, and at the same time it is undeniably sensual in a way I find most noir lacks. The day after reading, I was recommending it to anyone I could think of. Over a year later, and I still can’t shake just how much I loved the way this story came alive, shook me, and forced me to look at long-considered myths in new ways.

Thank you, Hannah, for “Father Pena’s Last Dance.” Sorry it has taken me over a year to tell you how much I loved the story. And I hope that, somehow, this fan letter reaches you.

For those of you who have yet to read this story, I encourage you to do so. You can currently buy a PDF of the August 2010 issue for $3.99 at www.rofmag.com and it’s well worth it. You’ll likely enjoy a few of the other articles and stories there as well.