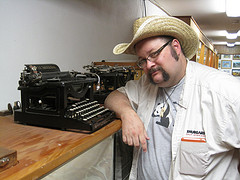 Another Foolscap has come and gone, and I am left facing the inevitable approach of Autumn with memories and a stack of business cards and bookmarks. I did the math on Saturday night, sitting at the far end of a 15 person (approximately) dinner party with Omaha Sternberg, Janna Silverstein, Rosemary Jones, and Phoebe Matthews and realized it was my fourth appearance at the con. In that time, Foolscap has become one of my favorite conventions, one that I never miss. And the dinner that night was part of the reason why. There we were, over a dozen speculative fiction writers, editors, and family, just shooting the breeze over Italian food in the quiet time between round-table style panels. If I could spend every Saturday night with those folks, I’d do it in a heartbeat.

For one, it gave me a full weekend to be an author in the company of other authors in a more intimate setting than the larger conventions. And that’s awesome, because I love other creative types. Secondly, I got to do so with a good mix of people I know and new faces. Friends and fellow writing group members Jeremy Zimmerman and Torrey Podmajersky were there, as was the talented Jerry Minor who I only see at conventions where I pick up at least a piece or two a year. Matt Youngmark of Chooseomatic books was there with his wife, both of whom I met because of Foolscap LAST year, and I got to see him give a dramatic interpretation of the first issue of Avengers on a panel, so that’s a solid win. New this year were the local author Folly Blane and metal & enamel artist Elizabeth Adams. (Hanging out with both of them in the bar late Saturday night was yet another highlight, even though it made some of us late to panels we wanted to see.)

My own panels went just smoothly enough to get discussions flowing without, for the most part, becoming confrontational. With a program docket that ranged from intelligent marital aids to finding beauty in decay, I feel I got the full spectrum of experience in the discussion arena. And the writing workshop on Friday was exceptional–and here I'm just talking about the 3 sessions I attended, not the one I ran. The one I ran, leading it off with a 90 minute novel plotting section, was productive, on time, and, I would hope, helpful for people. They certainly seemed to be taking a lot of notes.

Other things gleaned from the weekend: